The Cloud just got cheaper – again

Posted on December 15, 2016 by wcurtispreston

A few weeks ago we did a webinar about whether it makes sense to use the cloud to store backups. Every time somebody at Storage Switzerland says something positive about storing things in the cloud, we can always count on naysayers jumping in with comments saying that it’s too expensive. Let’s see what happens this time.

Amazon is dropping the pricing for its S3 offerings, including Glacier. It’s now as cheap as $.0004 per gigabyte to store things in cold storage, or $.02 to store it in infrequently accessed storage. There is usually no charge from most cloud providers to put data into their services (i.e. ingress charges). There are, however, egress charges. So customers doing a lot of backups or archives and very few restores or retrievals will make out the best, and anyone who does any large scale restores could incur large egress charges (as high as $.12 per gigabyte, but usually much less than that). But the fact is that it just got cheaper to store backups in Amazon.

Even before these price drops, I saw a cost comparison between a number of different storage options that was prepared by a company that, among other things, offers tape products. I was surprised to see that even they recognized just how cheap it was becoming to store data in the cloud, especially in cold storage.

There’s no question that some environments can save money by storing backups in the cloud. Are you the right type of environment? We discuss the types of use cases that work well in the cloud in the webinar Does Object Storage Make Sense for Backups? In that webinar we also discuss the idea of taking concepts from the cloud, like object storage, and leveraging them in your on-premises backups. You can view it on demand at anytime from your web browser or on your iOS/Android device. 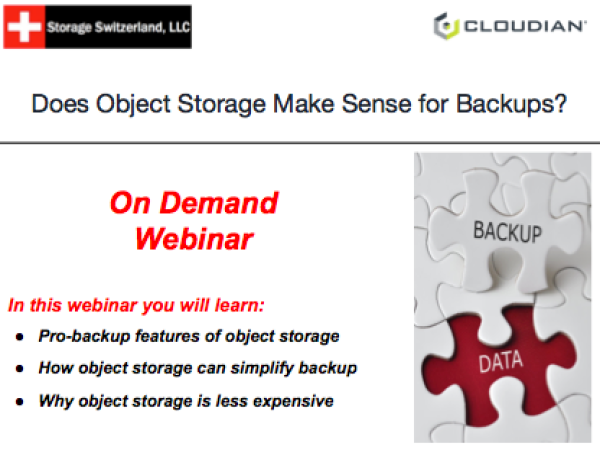 W. Curtis Preston (aka Mr. Backup) is an expert in backup & recovery systems; a space he has been working in since 1993. He has written three books on the subject, Backup & Recovery, Using SANs and NAS, and Unix Backup & Recovery. Mr. Preston is a writer and has spoken at hundreds of seminars and conferences around the world. Preston’s mission is to arm today’s IT managers with truly unbiased information about today’s storage industry and its products.