In most data centers, there are two distinct types of storage. Primary storage to respond to the needs of performance demanding applications and secondary storage to maintain a backup and provide secondary copies of the primary storage. These two tiers have led to the creation of a plethora of companies dedicated to the movement of data between these tiers and the management of data on the second tier. Reduxio claims that with the third release of TimeOS software for its storage solution, organizations can now collapse these two tiers into one, simplifying management and reducing costs.

IT professionals are under pressure from all sides. First, users and application owners demand more and more performance for less and less money. Most IT professionals look to all-flash arrays to help them meet performance demand. But doing so leaves less funds to invest in the management of a secondary tier of storage. Second, when there is an application corruption or accidental deletion users want to be back up and running in minutes no matter the failure. They also won’t tolerate any data loss. Third, new threats, like ransomware, exist that specifically attacks data and backup applications. Finally, there is the user expectation that IT will keep all data for all-time and they can have as many copies of that data as they want to perform reports and analysis. 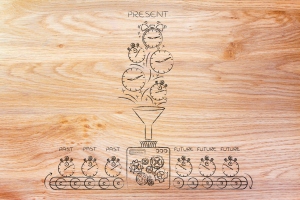 All of these demands and expectations leads to a big headache for IT. Reduxio V3 expands its flash-based architecture, controlled by the company’s patented TimeOS operating system. The software unifies previously separate capabilities like continuous data protection and copy data management. Unlike all-flash arrays, the Reduxio hardware also includes hard disk drives and the additional data that data services create are stored on the lower cost tier.

The Reduxio HX Enterprise Flash Storage is the host for the TimeOS operating system. It is a dual controller 2U chassis, with 38.4TB of raw capacity, 120TB+ of effective capacity, once deduplication and compression are factored in. The deduplication and compression are always on and global across all the data stored in the system. There is a generous 256GB DDR3 ECC cache for rapid reads, the persistent storage consists of 8 x 800GB eMLC flash drives and 16 x 2TB SAS hard drives. There are 4 x 10GbE ports for iSCSI connections to the network infrastructure.

Since inception the Reduxio systems are known for their ability to instantly recover data from any second in time as well as its intelligent use of flash and hard disk drive storage. The system uses caching and tiering to address the performance challenges that the organization places on IT. The most actively read data utilizes the 256GB DRAM as a cache. Cache is always deduped and compressed. From there, everything is tiered instead of cached – a key difference – as the data is physically stored exclusively on those tiers. The Tier-X feature manages the autonomous multi-level tiering of flash and disk and all data movement deals with optimized data.

The in-line, in-memory global deduplication and compression capability of TimeOS makes the cache and both persistent storage tiers as much as 7X more effective.

Reduxio added NoRestore in version 3, which provides a near-zero RPO/RTO data protection capability with the ability to instantly volumes. V3 also includes a migration facility that enables new customers instantly migrate data to the platform without waiting for application data to be copied. Migration is a feature that most storage systems leave out, even though it is something that every customer buying a new system will obviously need.

The ability to eliminate, or integrate, a second type of storage and several processes like data protection and copy data management is appealing. The fewer number of variables IT has to deal with, the easier and more effective their job becomes. Reduxio is more than just a hybrid array, it is an array with three types of storage (RAM cache, flash tier and HDD tier) that also includes data services like migration, continuous data protection and automated recovery.

George Crump is the Chief Marketing Officer at VergeIO, the leader in Ultraconverged Infrastructure. Prior to VergeIO he was Chief Product Strategist at StorONE. Before assuming roles with innovative technology vendors, George spent almost 14 years as the founder and lead analyst at Storage Switzerland. In his spare time, he continues to write blogs on Storage Switzerland to educate IT professionals on all aspects of data center storage. He is the primary contributor to Storage Switzerland and is a heavily sought-after public speaker. With over 30 years of experience designing storage solutions for data centers across the US, he has seen the birth of such technologies as RAID, NAS, SAN, Virtualization, Cloud, and Enterprise Flash. Before founding Storage Switzerland, he was CTO at one of the nation's largest storage integrators, where he was in charge of technology testing, integration, and product selection.