Home › Blog › Understanding the ROI of Cloud as Primary Storage

Understanding the ROI of Cloud as Primary Storage

As we discussed in our recent webinar, “Eliminate Backups and Simplify DR with Hybrid Cloud Storage,” IT planners can start small, sending backups to the “Cloud as Primary Storage” solution but where the ROI gets powerful is when the organization goes all in. Once an organization goes “all in” with the cloud as primary storage solution, the organization improves the efficiency and costs associated with the typical on-premises and cloud storage architectures.

First Question: Can the Cloud as Primary Storage Perform?

The problem with this approach is when there was a cache miss, the latency penalty of an IO roundtrip to the cloud and back was so high that it caused applications to fail and users to get frustrated waiting for their data. The “best” solution was to build the on-premises cache big enough so that there was rarely a cache miss and to lock 100% of database data in that cache. As a result, the on-premises cache begins to look more like a typical all-flash array, which requires monitoring and maintenance.

The large cloud providers (like Amazon, Google or Microsoft) continues to receive data, but the recall from those locations is very infrequent which also lowers costs. The on-premises cache now only needs to be large enough to store the most active data. It is essentially the data equivalent of a network router.

The ROI of Primary Storage in the Cloud

With performance concerns addressed, IT planners can focus on the ROI. Assuming that the organization takes a crawl, walk run approach in moving to primary storage in the cloud. The first step is to use it as a backup solution. In this blog, we’ll look at the backup ROI. And, in our next blog we’ll look at the ROI once the organization converts to using primary storage in the cloud.

Architecturally, the primary storage in the cloud solution presents either a block or file mount point. That mount point spans the on-premises all-flash appliance, the point of presence cloud and large cloud. For the backup use case, IT directs backup jobs or replication jobs to these mount points. The appliance then replicates data to the point of presence and the large cloud provider. Since most recoveries are from the most recent backup, the on-premises appliance quickly services restore requests since most of the data required, more than likely resides on it.

The primary ongoing cost of the backup infrastructure is the hardware that stores backup copies. With traditional backup, most organizations have an on-premises appliance and then another one at another location or in the cloud. As primary data expands, the need for more secondary data expands at an even more rapid pace. Backup storage is typically 10X the size of primary storage.

Using primary storage in the cloud eliminates the need for the hardware component of the backup infrastructure. It also eliminates the need for a separate off-site location since the on-premises appliance is automatically replicating data to the point of presence and the large cloud provider. It is unlikely that IT needs to expand the on-premises appliance to keep up with primary storage data growth. The point of presence and large cloud provider storage areas grow automatically as the organization grows. 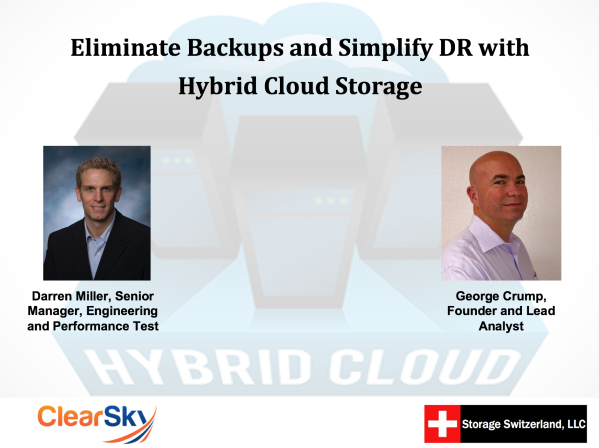