Home › Blog › Why Controllerless Software-defined Networking for the Distributed Cloud?

Why Controllerless Software-defined Networking for the Distributed Cloud?

Enterprises will continue to shift away from centralized data centers, in lieu of smaller edge locations that provide the latency, bandwidth, autonomy and privacy required by future forward workloads such as virtual reality (VR) and Internet of Things (IoT) driven business analytics. Like edge locations, cloud consumption models will also proliferate, as enterprises require the agility and cost efficiently that is inherent in obtaining and paying for infrastructure resources on demand, as they are needed and used.

The network becomes more impactful to business competitiveness and at the same time far more complex to manage. The network is the central “glue,” and it is serving an ecosystem of applications, users, and compute and storage that are more geographically dispersed and divergent than ever before. Furthermore, some of the growing number of edge locations might be “dark,” with limited or no IT staff. Against this backdrop, increasingly demanding service level agreements (SLAs) must be met or exceeded without breaking the budget.

Software-defined networking (SDN) provides single-pane-of-glass visibility and programmability across distributed and heterogeneous network infrastructure; this is fundamental to efficiently connecting the distributed cloud. Most SDN architectures employ a centralized controller that is deployed across external servers. Whereas one of the primary goals of SDN is to maximize simplicity, many external controllers are still complex to manage. Architecting the network to be managed by a singular controller is no easy or cheap feat and introduces a single point of failure into the network. When multiple controllers are deployed, typically they cannot federate with one another. Additionally, latency may be introduced as nodes are deployed further from the controller.

Pluribus takes what it calls a “controllerless” approach that distributes the network intelligence into the switches themselves. Effectively, each switch contains intelligence into the state of the network, and the entire network may be controlled via updates to any of the individual switches. This approach stands to further simplify the SDN experience. Meanwhile, network managers may create “slices” of the network to address specific workloads (thus standing to optimize resource utilization and security as well as the workload’s performance) – and these fabrics may be federated together to retain management simplicity. These slices also facilitate multi-tenancy for service providers or for IT teams at large enterprises seeking to become IT service brokers internally. 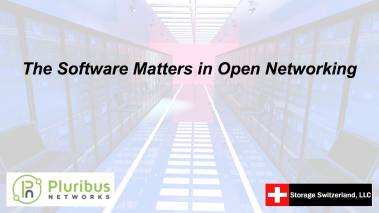