Grand River Conservation Authority is a Canadian watershed management agency, similar to the Tennessee Valley Authority in the US. They’re responsible for an area the size of Delaware with a population of almost 1 million people. GRCA has 150 FT employees, 200+ desktop PCs and 35 virtual servers on a three-host cluster – all managed by an IT staff of three.

Their data set includes file shares with millions of small files and lots of large GIS files, plus TB-sized MS SQL and Exchange databases. Backup includes a typical D2D rotation of daily, weekly and monthly backups, plus a tape-based copy sent off-site every month. As their data sets grew, the backup windows were getting squeezed so that they had to juggle what was backed up and when, plus there was no time for make-up jobs when a failure occurred.

With traditional backup, each data source – databases, file servers, etc – generates a separate backup job. That’s one every day, plus weeklies and monthlies, and the off-site copy to tape. The time it takes to run each job and manage the cycle of backups for the environment was overwhelming the small IT staff in this organization. While it’s a struggle to keep up with the current schedule they’d would like to actually increase incremental backups to multiple times a day – something that was out of the question with their old infrastructure.

Now using Nimble’s array-based snapshots GRCA has eliminated their full and incremental backup windows, which used to take 30 and 13 hours respectively. This has, in turn, ended the juggling of backup jobs and the manual ‘care and feeding’ of the backup system required just to keep up with data growth. The overhead saved is equal to one full staff day each week. And their data protection is actually better.

Taking snapshots every hour means GRCA’s recovery point is an hour instead of a day. They’ve also implemented a Nimble Storage array in a DR site and are replicating backups to it, giving them off-site data protection without shipping tapes. This also allows the organization to save 6 years’ worth of monthly full backups.

For more details on how Grand River Conservation Authority and another company, Imagine Learning, solved their backup problems with Nimble Storage’s array-based snapshots, register for this on-demand webinar with Storage Switzerland’s George Crump and Sheldon D’Paiva from Nimble Storage as well as IT Managers from both Grand River Conservation and Imagine Learning. All registrants of the on-demand version will be able to download a copy of Storage Switzerland’s exclusive report “Can Array-based Snapshots Save Backup?” 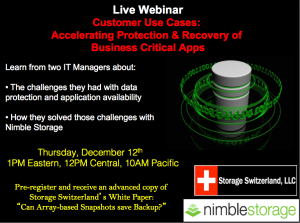 Eric is an Analyst with Storage Switzerland and has over 25 years experience in high-technology industries. He’s held technical, management and marketing positions in the computer storage, instrumentation, digital imaging and test equipment fields. He has spent the past 15 years in the data storage field, with storage hardware manufacturers and as a national storage integrator, designing and implementing open systems storage solutions for companies in the Western United States.  Eric earned degrees in electrical/computer engineering from the University of Colorado and marketing from California State University, Humboldt.  He and his wife live in Colorado and have twins in college.