Most data does not need to be on flash storage. It is either seldom accessed, or improving the speed of its access won’t impact application performance or user productivity. But there is a core set of data in the data center that does need to be on flash. This data is being accessed frequently and by applications that will benefit from even the slightest improvement in I/O performance. There are three steps that data centers need to take to implement a cost-effective all-flash data center.

The first step is to identify which files should be placed on flash and which should be placed on hard disk drives. The problem is this analysis has to be run in real time and the transfer between flash and hard disk drives has to be transparent to users and applications. While possible, static movement of data files typically won’t meet the demands of the busy data center.

Most data centers will find, as a result of this analysis, that less than 5% of their data is active on any given day. That means investing in enough flash capacity to cover 10% of their total data set should provide plenty of performance to the most active and near-active data in the environment. The remaining 90% of data could be stored on something other than flash with little or no impact to application performance or user experience.

If this analysis can be done then the second step is to design an infrastructure that is well suited to such a multi-tiered architecture. One of the design challenges to consider is how the second tier of storage will be implemented.

A typical choice is to use disk based storage integrated into the flash array itself. These systems are also known as “hybrid” arrays. Another approach is to have an appliance that can move data between a flash storage area and an existing hard drive based array. The first approach requires a new investment in hard drive storage from a single vendor and the second leverages the existing investment. Both however require the purchase, powering, and continued maintenance of on-premises storage. It is reasonable to expect that this non-active data will grow at a much faster pace than the active storage area. This means that the data center will be in the storage hardware buying game with no end in sight.

Another option that most data centers will overlook is cloud storage. Ignoring the potential latency for a moment, the cloud does provide many advantages. First, it eliminates the ongoing need to purchase additional storage. This actually enables an all-flash data center, while keeping costs contained by intelligently managing where data is stored. It removes the organization from the above mentioned storage hardware buying game.

Second, both active and inactive data can be automatically replicated to the cloud as it is added or changed. It can even be replicated across regions in the cloud for the ultimate in disaster recovery preparation.

The latency concern can be addressed in much the same way that a hybrid array addresses latency from hard disks versus flash storage. A cloud storage appliance may need to have more local flash storage and greater intelligence in data movement but the impact to the organization should be no different than a hybrid array where all storage is on-premises.

The final step is implementation. This can often be the most difficult step because it involves physically moving the data from the current hard disk based infrastructure to a flash based one. This means some form of migration process has to be performed, since data cannot typically just be copied to the new storage system. There has to be a block level migration. This is often done by actually restoring from a backup application to the new device, a process that can be time consuming and error prone.

After data is migrated applications and user accounts may need to be updated to point to the new data location. If secondary storage is going to be leveraged, it also means providing a way to move that data back and forth.

An alternative is to use an appliance that sits in front of existing storage and then automatically moves data as it‘s accessed to the flash storage area. Data created after the appliance is implemented could be written to the flash storage area as it is created. Then, as this data ages, it could be automatically moved back to the local storage area or even to a cloud storage facility as it was before. The system should provide a global view of all data and allow for the movement of that data between whatever storage types are available.

In the future many data centers will claim to be all-flash, but in reality few will be. They will still have hard drive based systems to store data that is not heavily accessed or data that justify being placed on flash. The economics of hard disk drives, especially since 8TB and 10TB drives are coming to market, are simply too compelling. This means that there will continue to be an ongoing investment in hard disk drives. The key question is who makes that investment, and where it’s going to be made. Will it be in the data center or the cloud?

Join Storage Switzerland and Avere for our on demand webinar, “How The Cloud Can Enable the All-Flash Data Center”. In it, our flash and cloud experts cover the above three steps in detail and provide ways that almost any company can leverage the cloud to make their data center all-flash today. 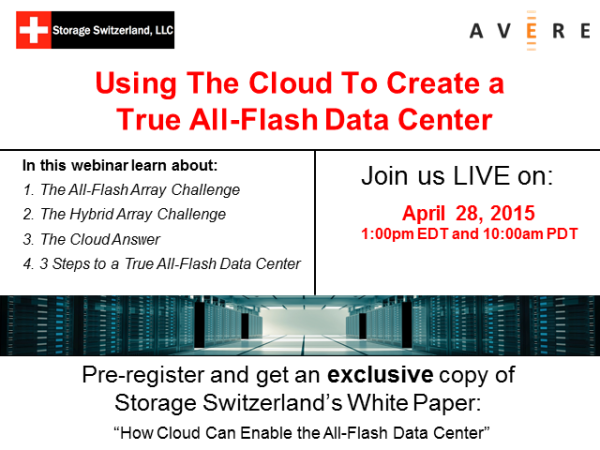