StorageShort: Why Does The Data Center Need NVMe Over Fabrics?

The NVMe protocol allows servers or storage systems to communicate to flash storage with more optimally. This PCIe-based architecture enables larger command sets and IO queue depths resulting in lower latency and greater performance. It is a wholesale replacement for SCSI. But there is another SCSI protocol lurking in the data center. Storage networks, both FC and iSCSI, encapsulate SCSI commands to share storage in a network. NVMe Over Fabrics is the next step in shared storage and it promises to provide near in-server performance for IO operations.

In this StorageShort we discuss what exactly NVMe Over Fabrics is:

Why Does The Data Center Need NVMe Over Fabrics? 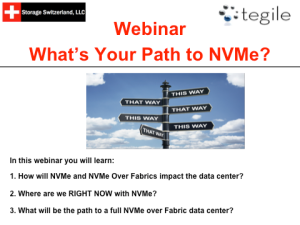 Before NVMe Over Fabrics, the network, just like the internal server connection to the flash drives, primarily communicates SCSI or some sort of file protocol like NFS or SMB. NVMe-F allows those networks to communicate via the NVMe protocol which means they to can take advantage of the advance command set advanced queuing.

Before we see NVMe Over Fabrics attached servers, the first NVMe Over Fabrics implementations will likely be private to a storage cluster. A NVMe network should deliver near in-server storage IO performance and latencies. This near in-server performance should allow for the creation of very fast and low latent scale-out storage infrastructures. Imagine a scale-out architecture with scale-up latencies.

NVMe is a protocol that will, and already is, seeing rapid adoption. The first iterations will be inside storage systems to help with internal IO. Then, thanks to NVMe Over Fabrics, the use case will expand to create very scalable but low latent scale-out storage architectures and then finally complete end to end NVMe connectivity.