Home › Blog › The ROI of an early Storage Refresh

The ROI of an early Storage Refresh

When a storage system is purchased, the hope is that it will meet the storage performance and capacity demands of the data center for 3-5 years. Thanks to the changing compute environment and capabilities available from new storage systems, it may be well worth it for IT to reconsider those carefully laid out plans for equipment capitalization. It may save your organization money and you a lot of time by refreshing storage now instead of waiting.

The cost to operate a storage system, in terms of people and resources like electricity and data center floor space, typically becomes far greater than the initial purchase price. But new flash-enabled storage systems have the potential to dramatically decrease those ongoing costs. The ability of flash to reduce operational expenses can be so significant that the return on investment (ROI) can cover both the old system and the new system in less than the time originally allocated for just the old system (3-5 years).

Much of the reason for this rapid ROI of a new system has to do with the unique capabilities of this solid-state storage. Flash allows for denser databases, denser virtual environments and more scalable file servers. This denser, more scalable reality means fewer physical hosts need to be purchased, hosts that come at a premium price compared to other single purpose servers. Fewer servers also means less floor space and less power consumption.

In addition, flash allows data efficiency features like deduplication and compression to run without any noticeable impact to users or applications. But data efficiency is often used in an attempt to bring the cost of flash closer to the cost of hard disk drives. More cost effective flash by itself does not necessarily justify the investment in a new storage system because it does not reduce the overall price per GB, it merely brings parity. However, if that data efficiency can be applied in a hybrid array, across that array’s flash and hard disk tiers, then it can significantly reduce the cost per GB of storing an organization’s data assets. This is because all the data being stored can be optimized, not just the data in flash.

Finally, high performance storage systems often free up the IT team considerably. IT spends a lot of time tuning storage (and, arguing about tuning), so that it can deliver acceptable performance to the applications and virtual machines that run on it. And, since performance problems often appear suddenly, it’s usually a “drop everything else” event, which means that other important tasks get put on hold. A well designed flash array can eliminate, or at least significantly reduce, the amount of tuning the IT team has to perform.

In our on demand webinar we will discuss how Hybrid Flash Arrays can deliver All-Flash Array performance and justify an early refresh. By signing up for this one event you will also be able to attend our other recent webinar on flash storage “All-Flash Data Center, Myth or Reality?“. 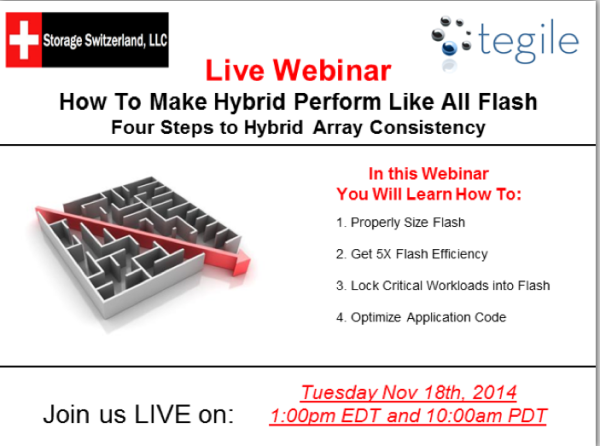 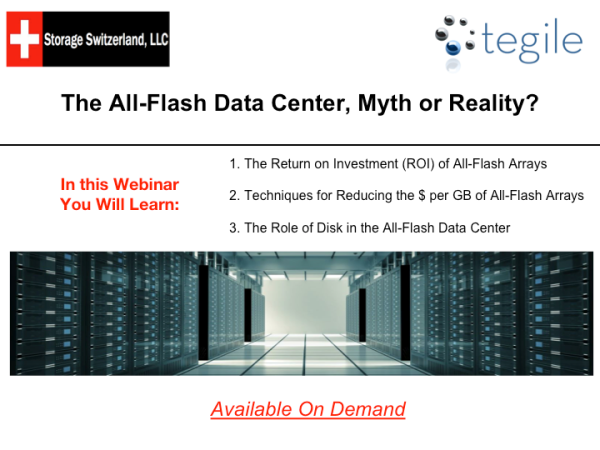